Humans are curious animals. The changing landscape of education and technology has made it possible for us to learn nearly anything from any location at any time. But what about those people who want to learn a more traditional way? Outside of the institutional landscape of higher education, what opportunities exist for those who want to learn unique skills from passionate people, in-person? What platforms exist to help facilitate those who want to teach those rare or unique skills to others? How are they being supported in their pursuit of spreading their knowledge to curious learners?

Our team was tasked with building that very platform. One that includes event creation, support, and marketing, venue coordination, and attendee-focused customer service. A platform to support passionate individuals who want to share/teach their unique knowledge to others at in-person events. Initially designed to support the Host/Teacher side of the platform.

To gain context, my team developed a research plan around the event planning and hosting industry. In an attempt to gain the broadest picture, we analyzed the domain and took a good look at some of the biggest players in the space.

Statistically, just over half of the events produced by party planners nationwide were corporate functions or business meetings.If you look at the other side of this statistic, almost half of the events in this country were non-business related. That could mean religions, personal, educational, etc.

The majority of event clients/hosts use a single vendor (all-in-one solution) for their event needs. There’s little room in the market for someone who provides only one service (catering, lights, marketing, etc.) that could easily be provided by another vendor that advertises as an all-in-one solution.

competition in the domain

We looked at many of the dominant service providers in the industry that had digital platforms to help us visualize potential market opportunities and to help inform the direction of potential feature exploration.

We identified a clear market gap with virtually no competition, in the area of a platform providing many features that caters primarily to the non-corporate user. This gap seems to be the exact user we were tasked with creating a platform for.

learning from hosts and event creators

Having identified our underserved target users, we set out to learn from them. We aimed to uncover the deeper “why” behind their passion for sharing and to better understand their actions, motivations, goals, and pain points before, during, and after events. We conducted one-on-one interviews with dozens of people from no less than a dozen fields.

Our interview requirements were simple:

Attendance management is the biggest problem for our event hosts

"I am always anxious about no one coming or too many people coming; you can't predict the turnout and I cant afford to waste supplies."
2

"I'm not making a lot of money here, every event dictates whether I'll be able to have another one."
3

"I'm joyful and grateful to have the opportunity to share my gift."
4

Creating community and networking is a major motivator for most

"I want to create a space for like-minded artists to continue to develop and network."
5

Marketing to the right audience is difficult

"It's difficult to figure out how to maintain a consistent audience; marketing is one of my biggest challenges."
defining the problem

Having a much deeper understanding of our users, we wanted to more clearly define the exact problem to solve for. Attempting to design an “all-in-one” platform within the timeframe allotted might prove in-effective. Also, with the new knowledge that an “all-in-one” platform would provide services to our target users that were not specifically mentioned as pain points in the interviews, we chose to avoid ‘feature bloat’ and scope down to the most prevalent issues experienced by the greatest number of people: their attendees.

We created a set of considerations and a statement to guide our process, and inform our design decisions.

Discoverability:
Putting the most needed, utilized information at the forefront of the design, not buried in menus

Empowering:
Give our hosts the power to educate others by our handling of the event details.

Less is More:
Minimalist in design, making event creation and execution as simple as possible.

As someone who wants to share my passion and knowledge with others in a non-digital space, I need a solution to give me more information and control over my guest’s attendance so that I can prepare for my events accordingly, which can lead to better feedback from my attendees’ and increase my ROI.

In order to keep the team aligned on who we were designing for, we created a persona. This persona embodied the core attributes of our target user, namely their goals, motivations, and frustrations.

We began to ideate around what kind of designs might best service this user, utilizing techniques like 6-8-5 sketching, Brainwriting, etc. In order to stay agile and move quickly, we chose paper prototypes for our first round. We developed three divergent designs to address the problem.

This design allows the host of an event to rate individual attendees. Similar to an app like Uber, your rating can enable you to continue to participate in the platform or (if your rating gets too low) it can prevent you from participating. 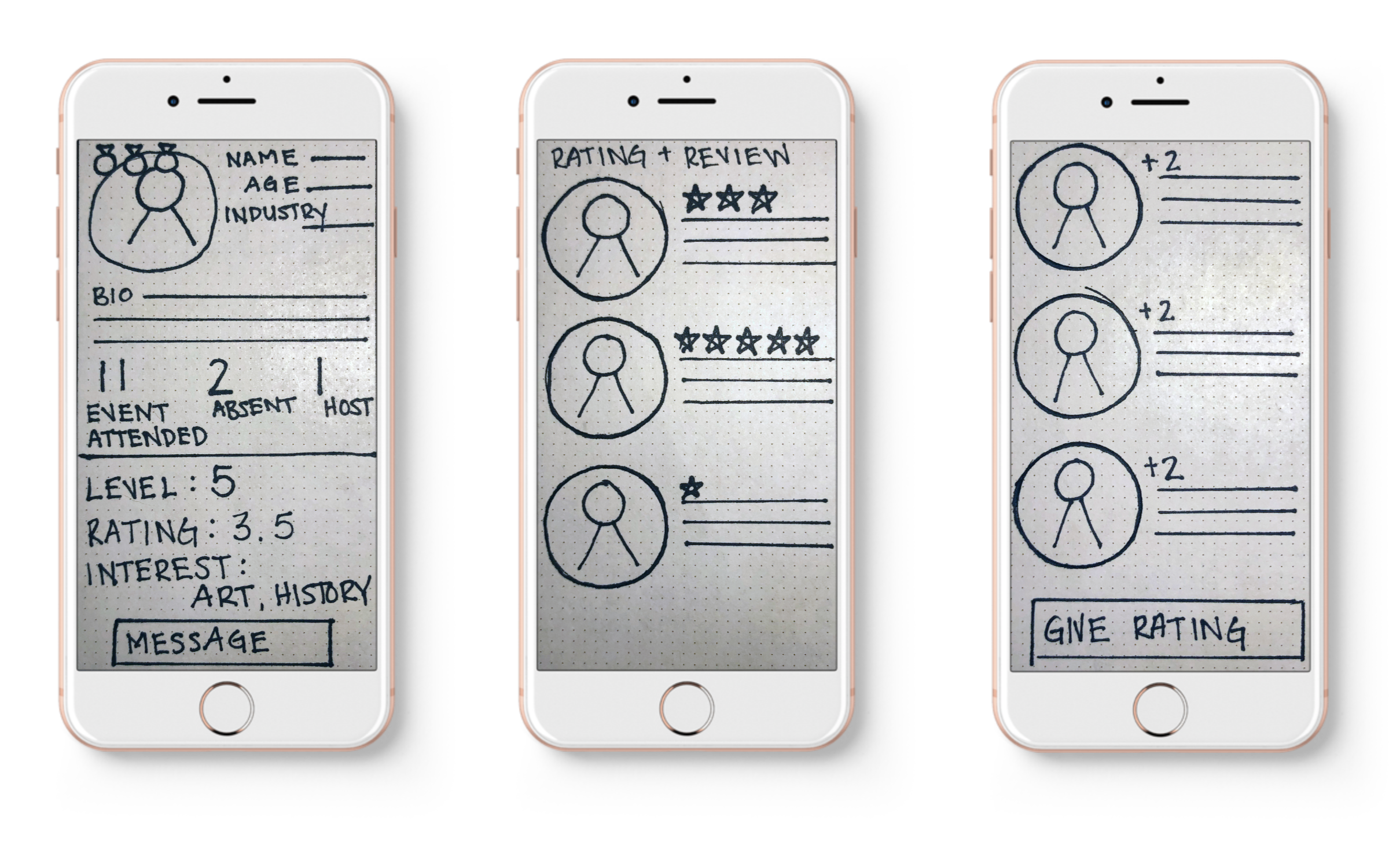 This design focuses on direct connectivity between the host and the attendees. The host can send an immediate push notification to all the attendees as an event reminder, check last-minute confirmation for an event, or alert their attendees if any last-minute issues arise. This design works to strengthen communication between host and attendee. 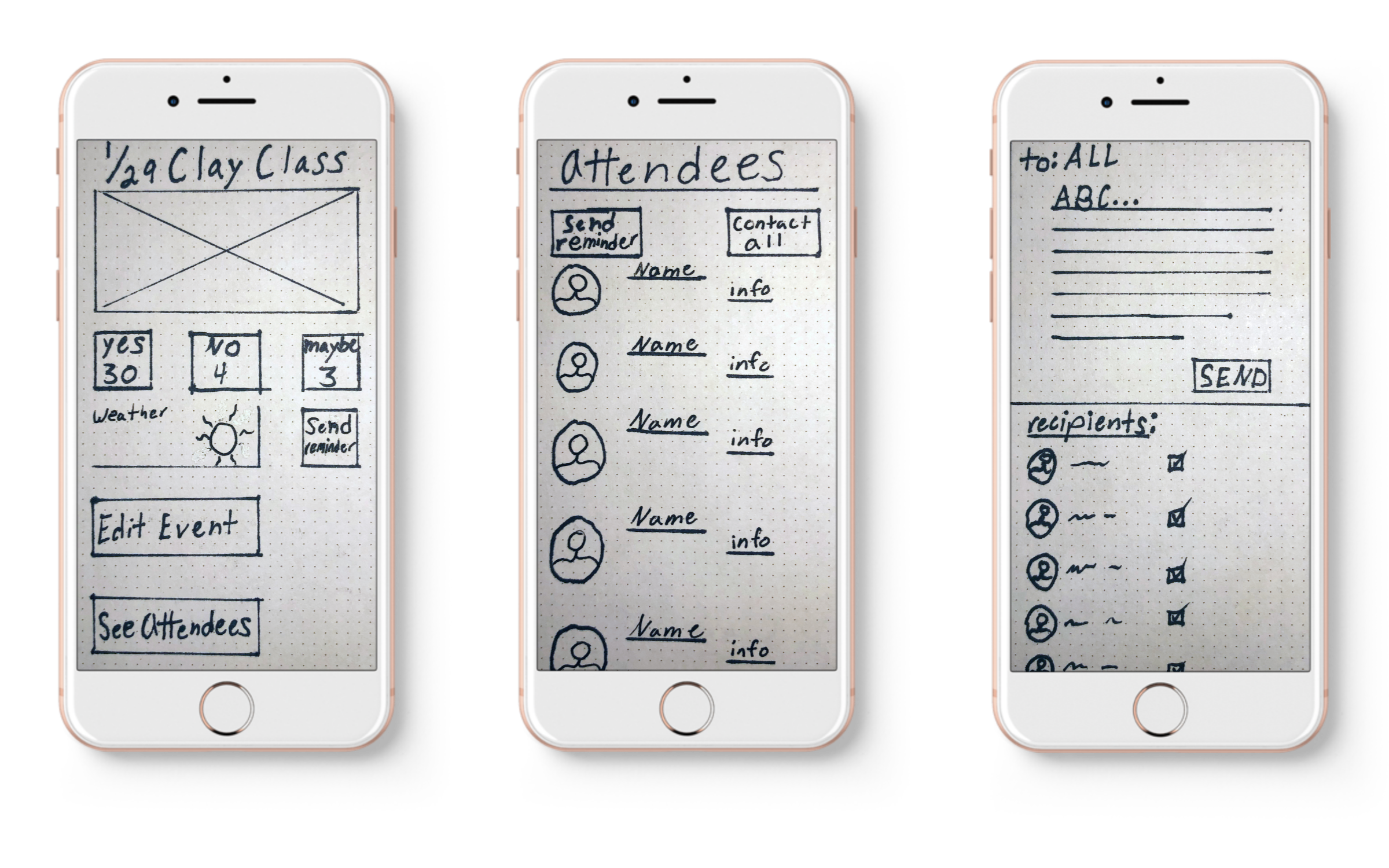 This design leverages the strength that money has over all of us. This design requires (even for free events) that the attendees commit monetary to an event. In the case of a free event, money will be locked up until the attendee has checked-in at the event. Those funds will be immediately released back to the attendee. This concept also offers basic post-event analytics to help the host with tracking monetary expenditures and returns. 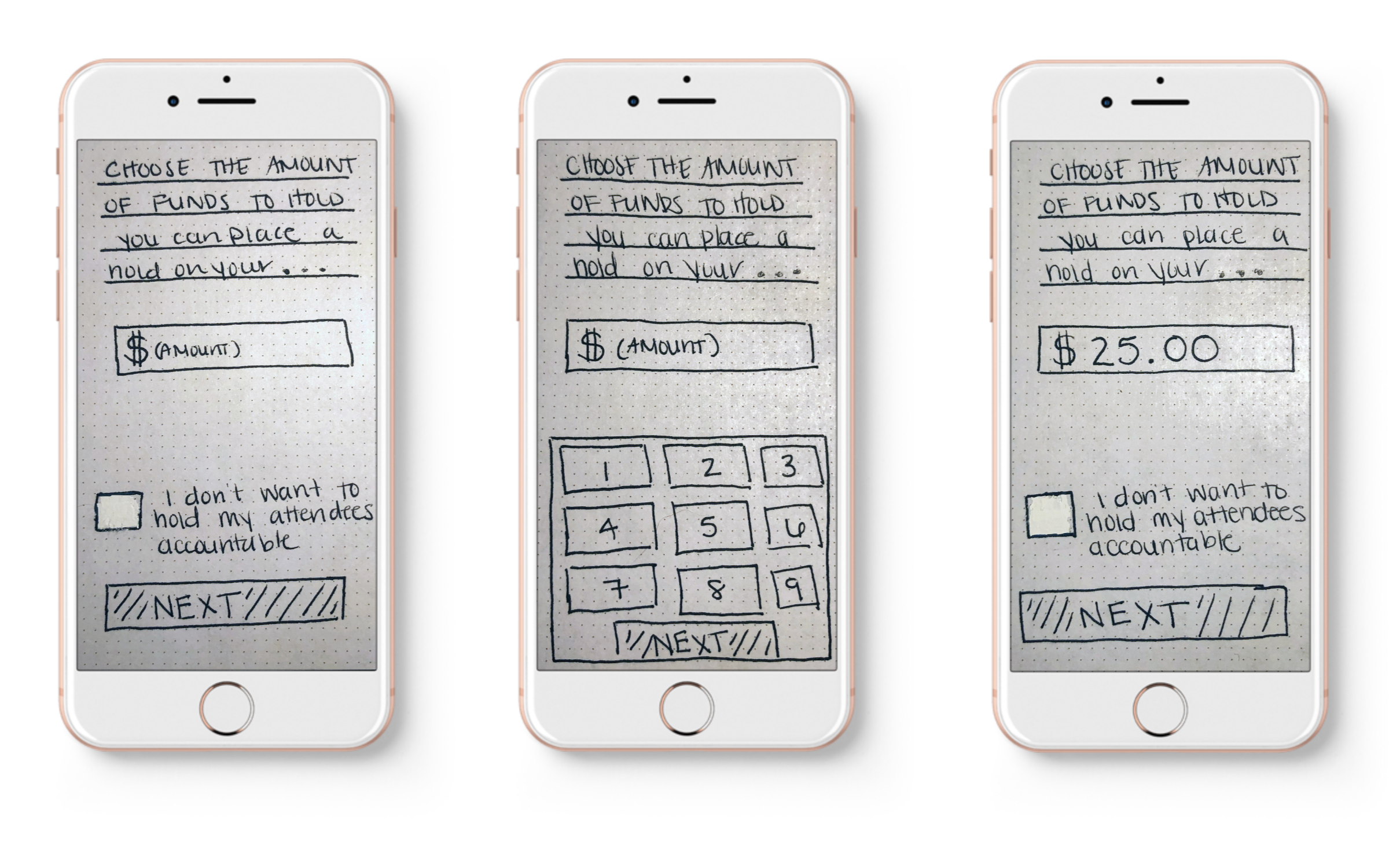 Formative testing of the design

We took a few photos of our prototypes, uploaded those images into InVision and created a clickable prototype to be tested on cell phones. We conducted guerilla testing along with traditional user testing in order to get a better understanding of how users would respond to these designs in multiple situations. People gravitated towards ‘Confirmation by attendees’ and ‘Monetary accountability’ and away from ‘Ratings based accountability’.

Ratings based accountability
Most testers felt that going through EVERY attendee and rate them was something that they would never take the time to do. Not to mention that the host would need to remember everyone and the rating they felt they deserved till after the event. This design scored poorly.

Monetary accountability
The basic concept of Monetary accountability was a home run with our testers. Money is a large consideration when planning these events and they immediately felt a sense of ease knowing that the money they earned during the “ticketing” phase would stay with them even if attendees didn’t show.

Confirmation by attendee
Users resonated with the core concept. They liked the idea of being able to not only connect with all of their attendees with a few clicks but also the attendees being able to respond back, closing the host/attendee loop of communication. 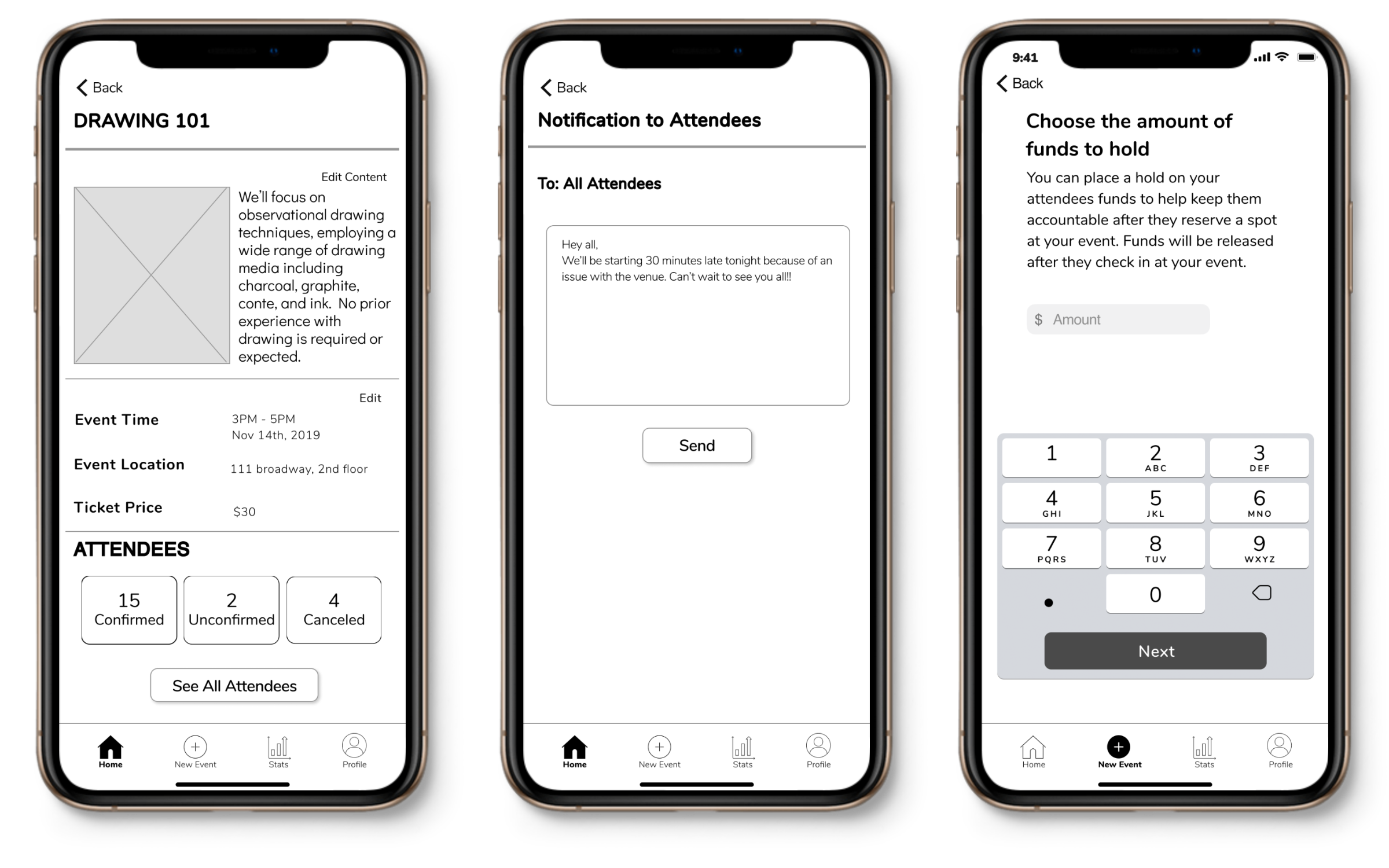 In this round of testing, we aimed to uncover any major usability issues experienced by the user while performing predefined tasks. These tasks were specific to the functionality of each design. For example, one task prompt was, “From the home screen, can you show me how you might contact all of the attendees at once for your upcoming event?”. Utilizing the ‘Think Aloud’ method, we were able to track the user’s progress through each task, prompting them for additional information when necessary. While we did uncover many opportunities for improvement, our users’ response to the new prototype showed our core concepts were promising and broadly effective, especially when paired together.

The basic flows were well structured.
Users felt that they were able to reach the end of their tasks in a reasonable number of pages/actions.

Minimalistic design helped readability
Users stated that at a glance, the information on the page was readily accessible and understandable.

Our final design implemented a homepage with horizontal cards displaying each event with the real-time accounting of confirmed and canceled attendees. This information is fed to the home pages by the results of its direct messaging function. The platform also offers an event creation flow for adding new events to the user’s account which includes all the critical event information (What, where, when, who, how, and how much) which offers the host the monetary accountability, even for free events. Post-event analytics for tracking monetary expenditures and returns are also available within the app. 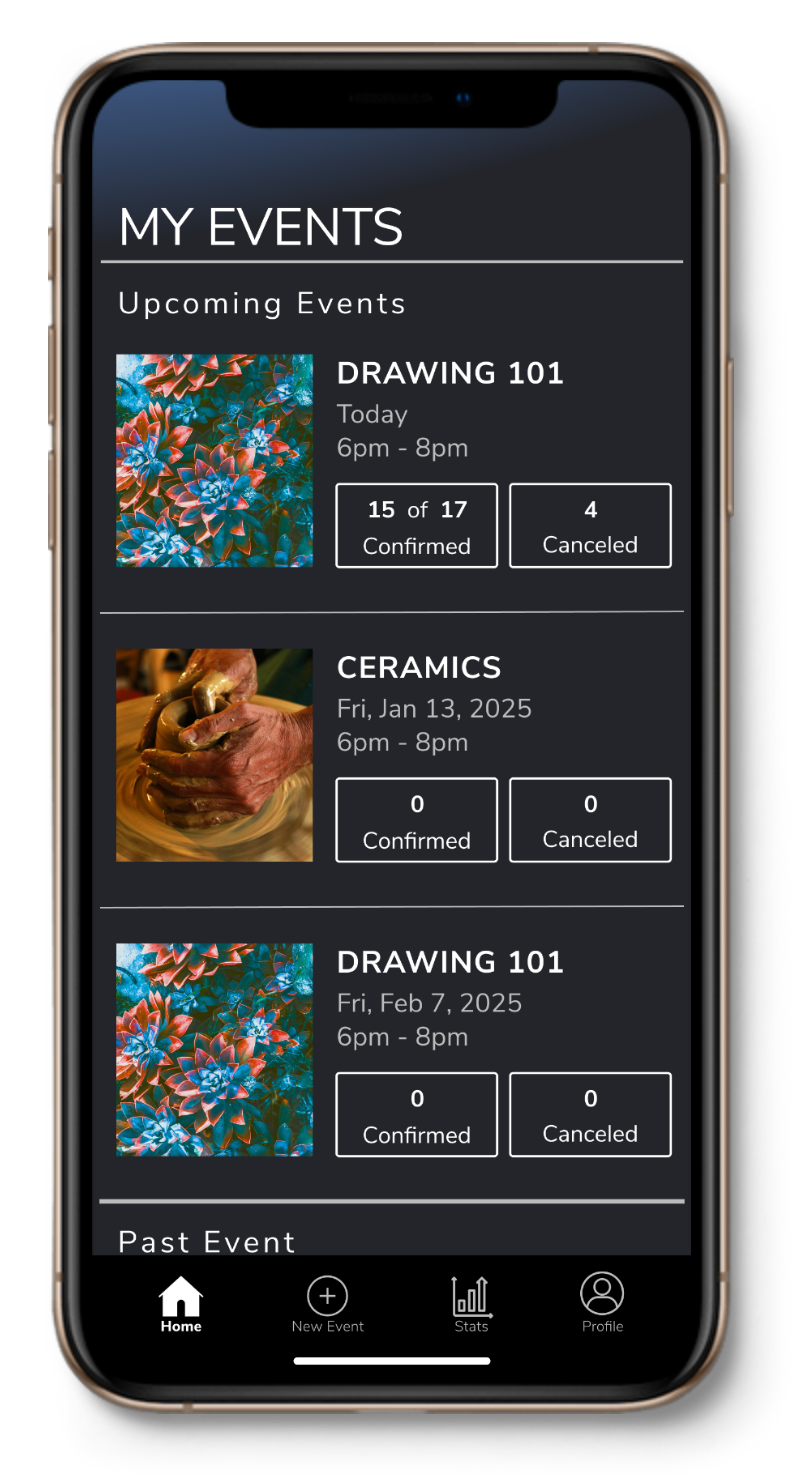 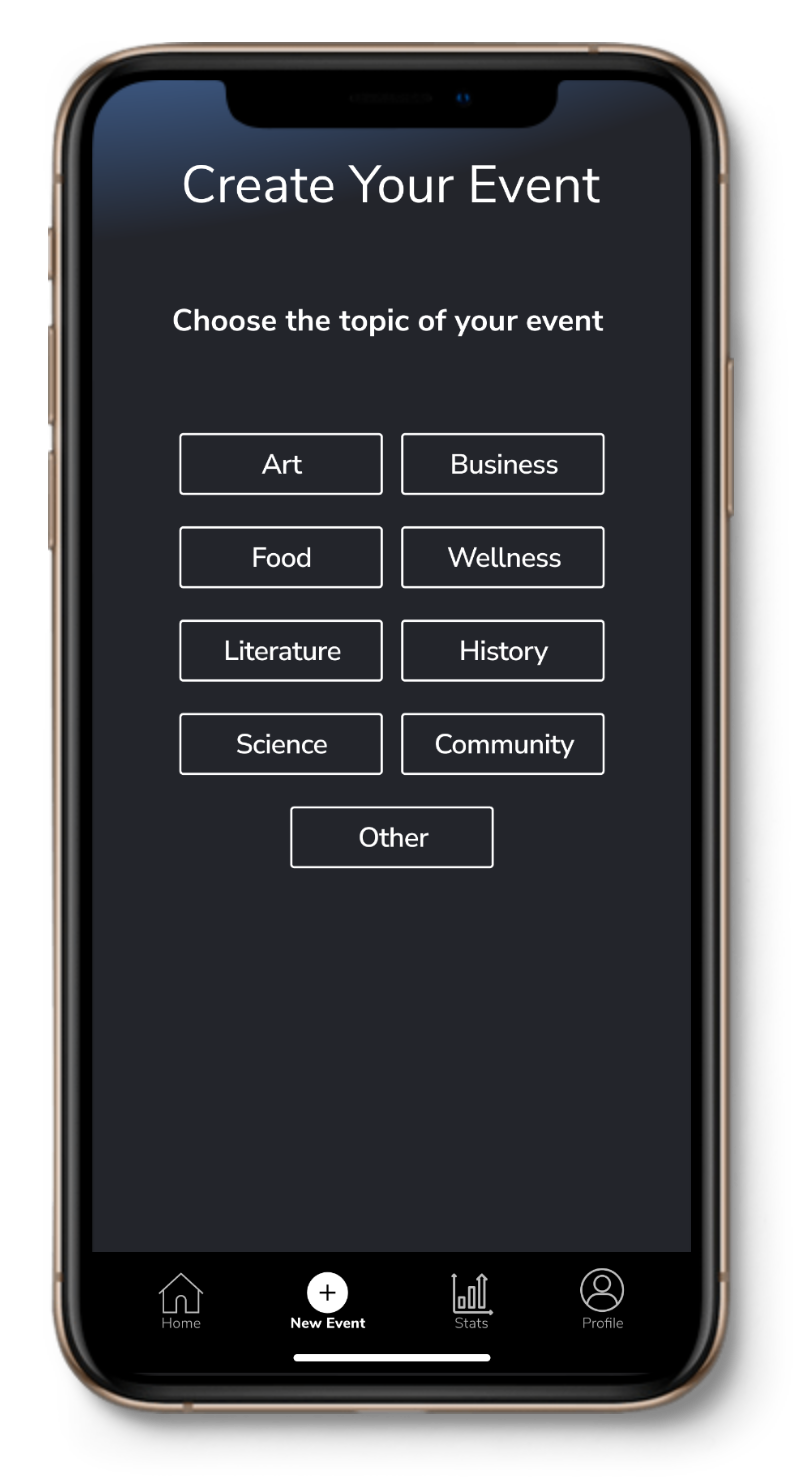 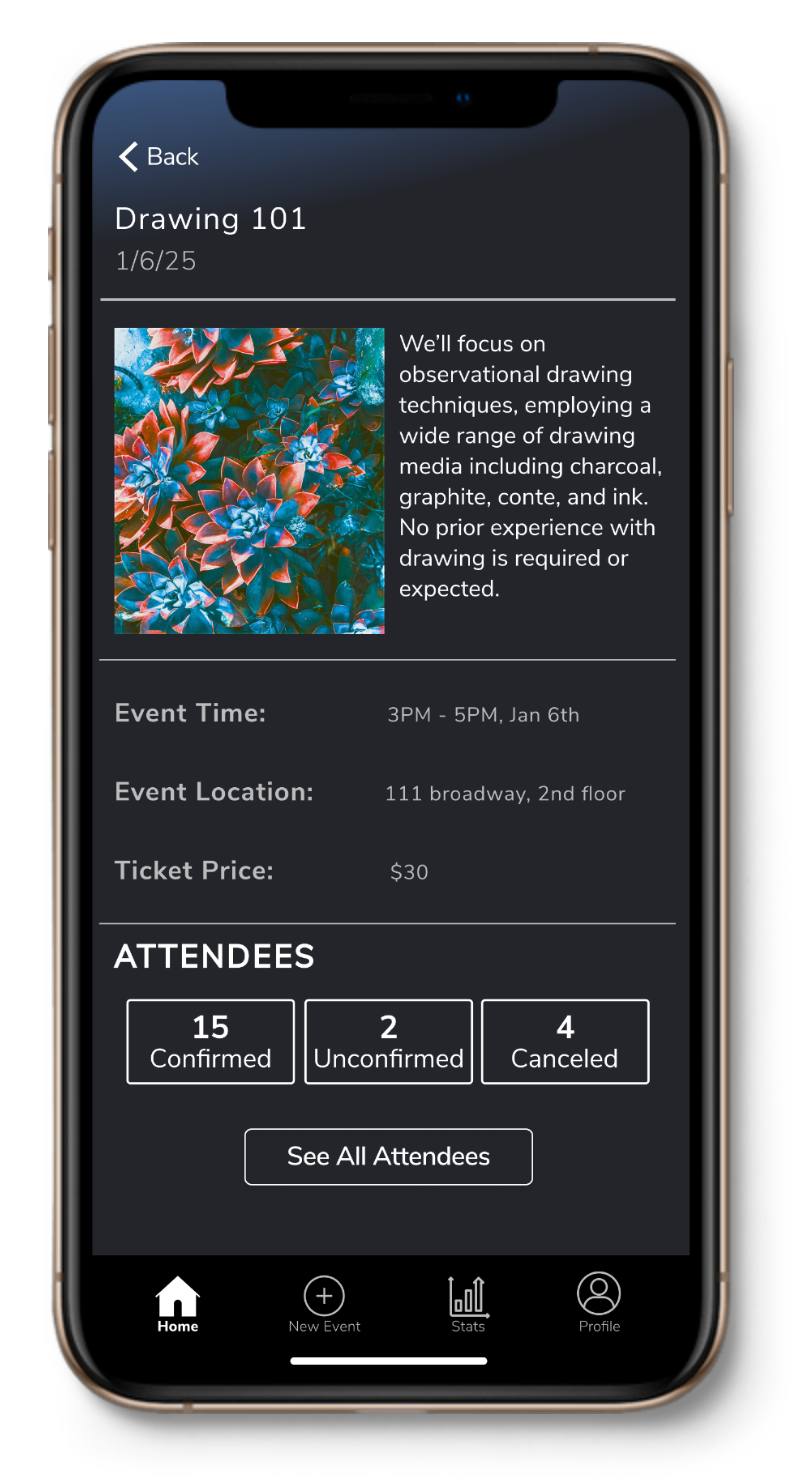 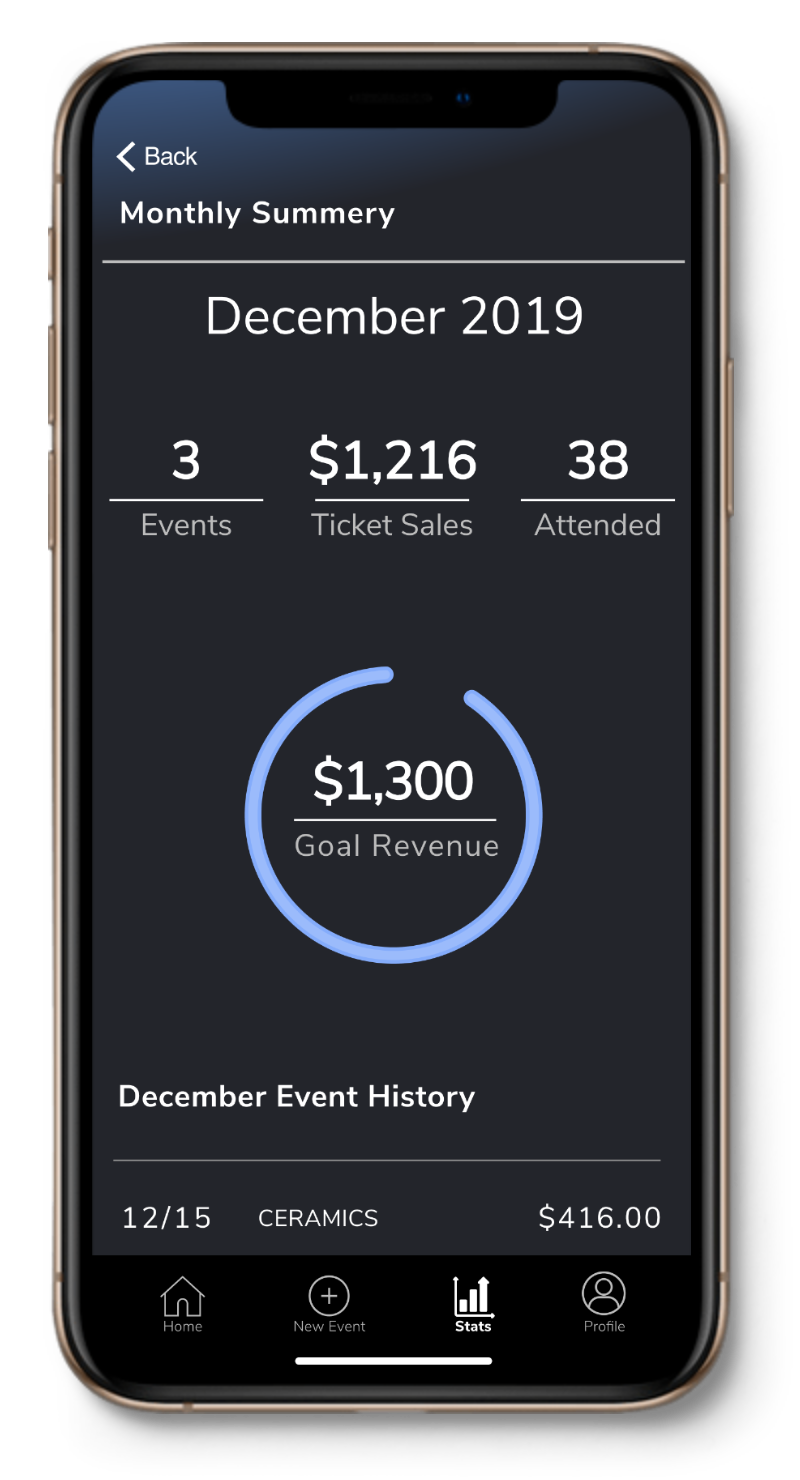 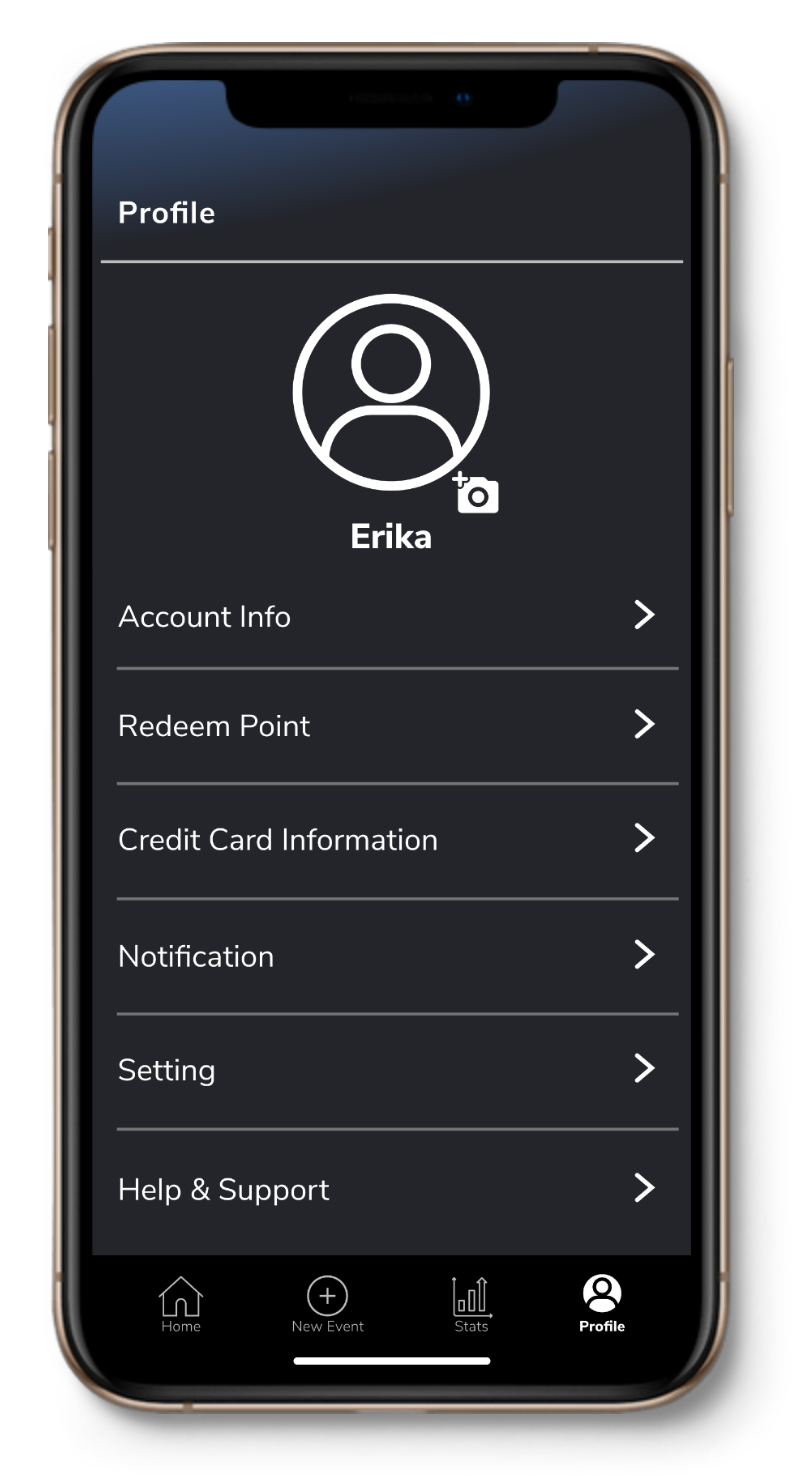 Above all, a team must stay unified. Working in a group of 4 without a design lead can be a challenging process in the sense that voting can often end in a deadlock. If everyone is passionate about their choices it can be a difficult process to move forward and a waste of time. Creating a team contract at the outset with a clearly defined process of how to get past a deadlock vote was critical to staying within our timeframe. As artistic and ‘right-brained’ as design can be, when others are involved, structure is critical.

With such a broad design prompt and no pre-existing design, staring into green pastures knowing you can design anything you want can go one of two ways. You could be elated with possibility and the lack of restrictions on your designs, or it could be totally overwhelming, making you second guess every direction you take and wracked with some real design F.O.M.O. Luckily, research ALWAYS seems to point us in the direction that serves our users best, and with that in-hand, you always seem to know where the design needs to go next.

With the lack of restrictions and an active imagination, it’s so easy to keep stacking on the functionality. My team struggled with this. In retrospect, I believe it’s important for any team to stay focused on the design process, the problem statement and the design principals. Create solutions with specific functionality that address the problem statement directly, with little to no feature creep. Keep it simple. Specifically, our design incorporated post-event analytics. Our design prompt spoke primarily to pre-event functionality and not post-event. An argument could be made that this does assist a host during pre-event planning but I don’t believe this to be a strong argument. Working on this platform with this team has been an incredibly enriching and educational process.